When Captain James Cook anchored the Endeavour off New Zealand's northern coast in 1769, he found ‘a bay of plenty’ with an abundance of food supplies from both land and sea.

The Bay continues to provide an abundance of good food and plenty of activities to take advantage of the natural beauty and diversity.

Tauranga is the Bay of Plenty’s largest city, and the sunny coastal city – which lays claim to being one of New Zealand’s sunniest cities – has plenty of galleries, shops, and dining options, along with marine adventures aplenty, with sailing, fishing and dolphin watching all popular.

Just 15 minutes from Tauranga city centre you’ll find Lake McLaren where you can take guided kayak tours, paddling metres from birdlife and alongside sheer cliffs into the Managapapa canyon. Come evening, the glow worms come out, offering the chance to paddle by the light of their constellations.

Head to the Papamoa Hills, about 20 minutes from Tauranga city centre, for a walk with great views away from the crowds.

If it’s food you’re after, you’ll find plenty to choose from, particularly along The Strand which forms the city’s main hospitality area. Collar and Thai on Devonport Road is also a popular haunt.

Not far from Mills Reef is Fernland Spa with its thermal mineral springs and hot pools which are popular with the locals and a lesser-known treat for tourists. The Spa is just five minutes drive from Tauranga and includes private thermal hot pools as well as the main communal pool. Massages are also available.

The region also offers the opportunity to step back in time at The Elms | Te Papa Tauranga, one of the oldest heritage sites in New Zealand. A 10-minute stroll from Tauranga city centre, The Elms features Category 1 listed buildings including a Mission House and Library, nestled in one hectare of tranquil gardens.

Not far from Tauranga you’ll find Mt Maunganui, one of New Zealand’s most popular surf beaches. Head to ‘the Mount’ for a walk to the summit, 232m above sea level, which takes around 40 minutes, or take in the 3.4km base track which takes you around the extinct volcano. Both walks offer great harbour and ocean views, and if you’re lucky, you might even see a seal or two sunbathing on the rocks.

In summer an evening stroll along Pilot Bay and around the base track of the Mount watching the cruise ships leave port can’t be beat – especially when you can end the walk at one of the great eateries between Pilot Bay and Main Beach.

At the base of the Mount, you’ll also find The Mount Hot Pools, New Zealand’s only salt water hot pools.

If you’re looking for somewhere a little quieter than the Mount’s popular beaches, head to Papamoa Beach, about 11km from Tauranga city centre.

For some cool refreshments, the Cider Factorie in Te Puna about 10 minutes from Tauranga city centre, offers a range of ciders on tap and in the bottle, along with wines and beers and a menu that includes tasting platters. The company’s ciders include traditional offerings, ‘Kiwi’-style ciders – including the very ‘Kiwi’ feijoa apple cider, Methode Traditionelle ciders and specialty ciders including the Ice Cider which is created using cryo-concentration which freezes the fresh juice at -20C to concentrate the natural sugars and flavours.


The lakeside city of Rotorua is a natural thermal wonderland, with geysers, bubbling mud pools, geothermal springs, alongside lakes and lush forests. It’s arguably New Zealand’s Maori cultural capital, with plenty of opportunities to immerse yourself in the culture, learning traditional flax weaving, taking in a performance or eating a traditional geothermal hangi, pulled straight out of the steaming ground. At Whakarewarewa Living Maori Village you can learn how geothermal energy is used in daily life for cooking, bathing, and heating.

Fifteen minutes from Rotorua city, you’ll find a stark reminder of the power of nature at the Buried Village of Te Wairoa.

The village, along with the nearby Pink and White Terraces –deemed the eighth wonder of the natural world – were destroyed by the 1886 Mt Tarawera eruption which buried the village under two metres of volcanic material.

Today, visitors can wander the 12-acre archaeological site, which includes excavated whare (houses) and the Rotomahana Hotel, which collapsed under the weight of the mud and ash which rained down during the sudden, violent eruption. The village also has a museum and scenic bush trails.

The region’s geothermal activity also offers plenty of opportunities for pampering in the many hot pools. Or head to Hells Gate for a geothermal walk and mud bath and spa.

The Polynesian Spa on the shores of Lake Rotorua in the heart of Rotorua city is another popular spa option – albeit one that gets busy when the tour buses roll in.

Cafes and restaurants are abundant in this tourist town. Capers on Eruera Street is an award-winning café – most recently named New Zealand Café of the Year – or for a unique experience go to the Fat Dog on Arawa Street. Be warned, the funky eatery is something of a local institution and is always busy. The lake end of Tutanekai Street is known locally as Eat Street, and the Thursday night market, also on Tutanekai Street, has a wide range of cuisine to choose from including Croatian, Indian, French and Italian, along with local kai (food).

For dinner with a view, jump on the gondola and head up to the Skylink Rotorua complex. By day, you can luge, mountain bike, zipline, sky swing, wander nature trails or enjoy a wine tasting or meal at the café or restaurant. Come nightfall Stratosfare Restaurant offers up not just quality cuisine, but views to die for. Cap off the evening with a guided astronomy tour.


Hamilton Gardens is an often overlooked place to visit. The ‘museum for gardens,' provides a window into different civilisations, their arts, beliefs, and lifestyles, from a peaceful Sung Dynasty Chinese Scholar’s garden to an Italian Renaissance garden.
No visit to Hamilton would be complete without a trip on the mighty Waikato River, and cruises leave from the jetty at Hamilton Gardens.

New Zealand’s longest river, the Waikato runs 425km, starting its journey on the slopes of Mt Ruapehu high in the central North Island volcanic zone and draining into Lake Taupo then through several towns before reaching the Tasman Sea at Port Waikato.
The river is a popular spot for kayaking, boating, rowing and trout fishing, while its banks are home to some walking and cycling tracks.

On the banks of the Waikato in Hamilton, you’ll find Waikato Museum, which includes more than 28,000 objects, including a substantial Maori taonga (treasure) collection.
Around the city, you’ll also find public art and sculptures, including Weta Workshop’s life-size cast bronze sculpture of The Rocky Horror Picture Show’s Riff Raff – tribute to the show’s creator, Richard O’Brien, who spent some of his childhood in Hamilton.
The sculpture is in Embassy Park on the banks of the Waikato. In late 2016 O’Brien returned to the park – where he once viewed movies at the Embassy Theatre – to officially open Rocky Horror themed public toilets in a bright red converted shipping
container.

The region is home to a subterranean maze of caves and underground sink holes carved out of the soft limestone rock and offers a range of activities from walking and boat tours to blackwater rafting, abseiling and even walking and ziplining 80m up in the roof of The Window cavern.

The system includes the Waitomo Glowworm Caves, about an hour out of Hamilton, which are New Zealand’s most famous glowworm caves. Both walking and boat tours of the caves are available, and you can also go black water rafting – abseiling, crawling, swimming and floating through the cave on rubber tubes while admiring the starry displays of the tiny living lights of the Arachnocampa Luminosa glowworm above.

For Lord of the Rings fans, Matamata, about 50 minutes drive from Hamilton, is home to the Hobbiton Movie Set. Daily tours are available, taking in the 1,250 sheep farm in the heart of the Waikato, and including a guided tour through the 12-acre set used in Peter Jackson’s Lord of the Rings and Hobbit trilogies. View the Hobbit holes, and swing by The Shire’s Green Dragon Inn for a drink from the Hobbit Southfarthing range, which includes two ales, an apple cider, and the non-alcoholic Frogmorton Ginger Beer.
At Waharoa, near Matamata, you’ll also find the Kaimai Cheese Factory, which also includes a great café.

Lake Taupo in the central North Island is the largest freshwater lake in Australasia, at around the size of Singapore. The result of a massive volcanic eruption, Taupo continues the region’s love of outdoor pursuits.

Just north of Lake Taupo is the Huka Falls with 220,000 litres of water crashing over the 11m waterfall every second. The falls, which are on the Waikato River, provide a popular backdrop for activities including bike and walking tracks and jet boat rides to the base of the falls.

If that’s not enough of an adrenalin rush, Taupo claims to be the skydiving capital of the world, with more than 30,000 jumps a year. For something a little more relaxing, there’s also 400 foot and 800-foot parasailing on Lake Taupo. 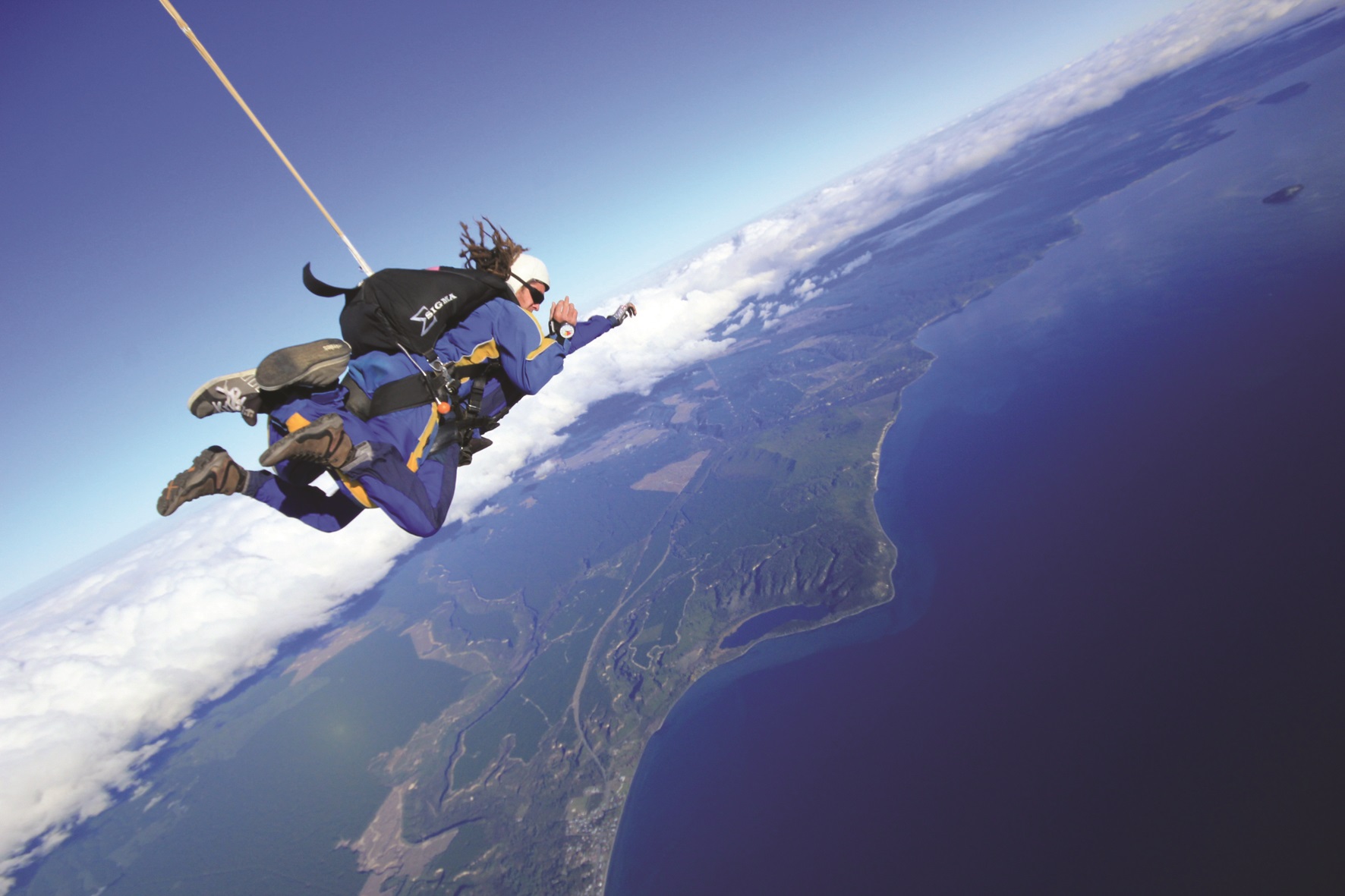 Also based around the lakefront is the Lake Taupo Hole in One challenge, something of a local institution with its challenge of hitting the ball 100 metres over the lake to a floating pontoon.

If you’re up for a challenge, Taupo is a good jumping off point for the Tongariro Alpine Crossing, one of the best one day walks in New Zealand – and possibly the world. The 19.4km tramp takes in dramatic landscapes, from the barren rock of the mountains to the Emerald Lakes, the Blue and Green lakes and the Red Crater. If you’re feeling energetic, you can take a side excursion up Mt Ngauruhoe. Shuttle buses operate from Taupo to the Tongariro Alpine Crossing.