London is home to architectural classics ranging from Big Ben, St Paul’s Cathedral and Westminster Abbey to modern wonders like the Shard and 30 St. Mary Axe.

Somehow classic landmarks like Tower Bridge intermix effortlessly with sleek, 21st-century skyscrapers like Renzo Piano’s Shard. Completed in 2012, the instantly recognisable Shard towers over the City of London and is home to many restaurants, offices and a viewing gallery. It is one of the tallest buildings in Europe.

30 St Mary Axe Is known as the Gherkin in reference to its rounded shape. Foster + Partners’ prize-winning construction, built in 2004, is “environmentally-conscious” and stands 41 storeys high.

Lovers of modernist architecture should also check out the “inside-out” Lloyds Building that was designed by Richard Rogers and has echoes of the Pompidou Centre.

Idiosyncratic favourites include The Royal Albert Hall, which had its foundation stone laid by Queen Victoria in 1876 and still hosts many concerts, and the wonderfully brutalist Battersea Power Station.

London is also home to hundreds of museums and galleries great and small, among them some of the finest on the planet. 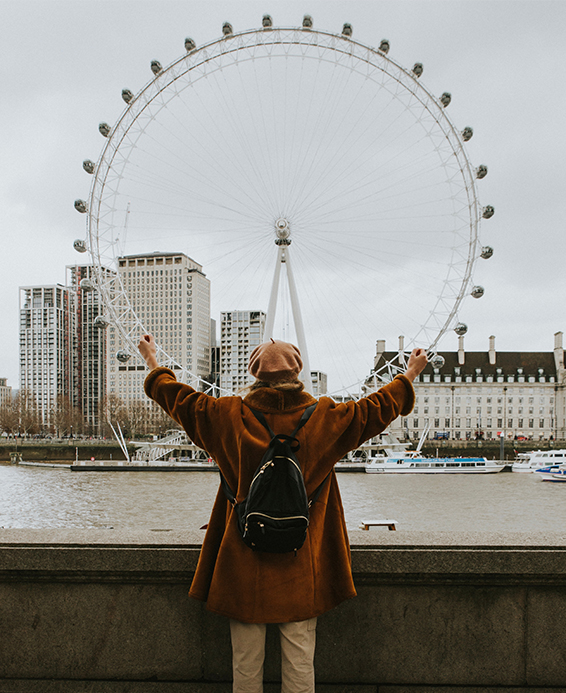 Paris, one of the world’s favourite cities is also arguably the chicest.

Few cities can boast denizens as effortlessly fashionable as the Parisians, and almost every street reveals a glimpse of architecture, fashion and cuisine discoveries.

Walk through any of Paris’s 20 diverse arrondissements to discover long-time design favourites like the iconic Eiffel Tower – built by Gustav Eiffel as temporary construction for the 1889 World’s Fair and still standing proud, or classic buildings like The Louvre and Haussmann-era buildings with their grand facades.

More contemporary is the Centre George Pompidou, Renzo Piano’s grandiose complex that hosts the most extensive collection of modern art in Europe, and I.M. Pei’s remarkable glass pyramid that stands as a unique modern contrast to the Louvre.

The Louis Vuitton Foundation, designed by Frank Gehry adjoins the Bois de Boulogne in the chic 16th arrondissement. It is a glass-and-steel contemporary art museum created to look like a ship setting sail. These glass “sails” envelop a series of terraces from which visitors can take in several views of Paris.

The Institut du Monde Arabe, designed by Jean Nouvel, opened in 1987 on the banks of the River Seine. The museum features exhibits that explore the Arab world from before Islam through the 20th century. The building’s south-west facade is composed of geometric motifs taken from Islamic architecture and made up of 240 photosensitive motor-controlled apertures.

The Playground Duperré is a colourful urban basketball court on the Rue Duperré, in the city’s edgy Pigalle district. The space is a collaboration between Nike, French graphic design agency Ill-Studio and fashion brand Pigalle.

Shanghai, straddling both sides of the Huangpu River, is China’s glitziest city: a global financial hub with a continually changing landscape of soaring skyscrapers.

Design pioneers like Lyndon Neri and Rossana Hu (the architects behind the new Shanghai Edition complex) and Liu Heung Shing (photographer and founder of the Shanghai Centre of Photography) are helping craft the city’s emerging creative culture.

Cult brands like Spin Ceramics and Dong Liang are proving that “made in China” can mean crafted rather than ubiquitous, according to Architectural Digest magazine.

New culinary openings, like Polux by leading French chef Paul Pairet, underline that Shanghai is at the forefront with both cuisine and cutting-edge design.

Under the direction of David Chipperfield Architects, a gallery space is located in a wing of the glass museum.

Founded by Pulitzer Prize-winning photographer Liu Heung Shing, SCoP showcases a diverse body of photography, with topics that range from journalism to fashion and art.

The Pudong skyscape, featuring the Oriental Pearl Tower, on the opposite side of the river to the old centre, is a futuristic wonderland of architecture
and lights.

Barcelona, the Catalan capital is synonymous with the works of Antoni Gaudí i Cornet; the Spanish architect known as the greatest exponent of Catalan Modernism.

Gaudi’s works have a unique style – and nearly all located in Barcelona.

His masterpiece, the still-incomplete Sagrada Familia, is the most-visited monument in Spain. An estimated five million tourists visit the Sagrada Família each year.

No fewer than seven of his works have been declared World Heritage Sites by UNESCO. The unmissable highlights include Casa Milà, Casa Batlló, the Park Güell and Church of Colònia Güell.

Also check out the Museu Nacional d’Art de Catalunya, which showcases a thousand years of Catalan art from the 10th to the 20th centuries.

The Fundacio Joan Miró is a homage to works of the great artist. Designed by Josep Lluís Sert, the white walls and arches house a collection of more than 225 paintings, 150 sculptures and all of Miró’s graphic work, plus some 5,000 drawings. The building was constructed specifically to house Miró’s work and is a fusion of art and architecture.

The Museo Picasso was opened in 1963 and is dedicated to the works of Barcelona’s favourite adopted son Pablo Picasso. Over five decades later, the permanent collection of some 3,800 pieces has now spread across five adjoining palaces, two of which are devoted to temporary exhibitions.

Barcelona is also known for modern artworks. Head for the minimalist MACBA (museum of contemporary art) which was designed by Richard Meier. The exterior has been likened to a giant fridge.

MACBA, inaugurated in 1995, has a library and auditorium that host an extensive program of concerts, seminar and cinema.

Hobart, Tasmania, in Australia, has changed a great deal over the past decade as the attractively slow-paced capital of the Australian island state of Tasmania.

Hobart’s urban renewal has ironically been driven by the out-there MONA (the Museum of Old and New Art), boutique lodgings and dining, which are found in the northern suburb of Berriedale, rather than in the city centre.

The MONA-effect has seen Hobart emerge as a city noted for its cool urban vibe as much as for its old sandstone buildings and laidback waterfront.

MONA is Australia’s most extensive private art gallery. It contains a rotating collection owned by collector, gambler and philanthropist David Walsh, who spent $175 million on the complex, which opened a decade ago.

Seoul, the ultra-modern capital of South Korea was the World Design Capital in 2010 and remains a global leader in urban design.

Built for Seoul’s stint as global design capital was the Zaha Hadid designed Dongdaemun Design Plaza (DDP), now a major urban development landmark that is South Korea’s fashion hub and a popular tourist destination. It is the venue for Seoul Fashion Week.

Korean design buzzwords include solidity, innovation, aesthetics and use of the latest technology. Local designer brands include LG, Hyundai and Samsung. Over the past decade, Seoul has been updating its skyline with more architecturally advanced and taller buildings that often double as commercial and residential spaces

The 63 Building – once the tallest building in South Korea - is located on Yeouido Island in Han River, and houses the headquarters of several business organisations as well as the world’s highest art gallery on the 60th floor, an observation deck on the top floor and an aquarium.

Dramatically striking is the Seocho Garak Tower East with a design inspired by Korean pottery. The facades were designed to reflect the light differently from every angle. Visit at night, and you’ll get to enjoy a beautiful dance of changing colours forming various patterns.

Samsung Town is the headquarters of the company and consists of three buildings. Each building is designed for a specific division of the business conglomerate. The three towers of different heights are made up of cubes of different sizes to form one unit.

One of the newest additions to Seoul is Lotte World Premium Tower, completed in 2017. Described as “sticking out of the ground like a sharp knife”, the tower features shopping facilities and offices. The observation deck and rooftop café offer dramatic city views.

Munich, distinctively different from most of the rest of Germany, the capital of Bavaria is a beautiful blend of old and new architecture.

Stradling the River Isar, Munich is a global centre of business, art, technology, science and culture. It is also a magnet for tourists, who flock to its old quarters and squares.

Home to institutions like the Deutsches Museum and BMW Museum, Munich is equally proud of the Allianz Arena, home to the famous Bayern Munich football team and is one of the highest-tech sporting arenas in the world.

On the northern fringe of the city, it holds 75,000 spectators and is known as the only stadium in the world where the exterior colours continuously change.

The stadium sits above Europe’s biggest underground car park, and the roof of the stadium has built-in roller blinds which may be drawn back and forth during games to provide protection from the sun.

Together with the synagogue and the Jewish Community Centre, the Jewish Museum Munich, a dramatic free-standing cube, is part of the Jewish Centre at St.-Jakobs-Platz.

Bavaria Filmstadt (or Bavaria Film City) is a movie and television studio complex on the southern fringes of the city. Here there are also original movie sets where visitors can star in their own mini-feature under the coaching
of a director.

Post-earthquake, Christchurch, the New Zealand city has built a reputation for innovative architecture and design popping up alongside some of the city’ s more classic icons like the Arts Centre, Canterbury Museum and Christ’s College.

Don’t miss the Cardboard Cathedral, designed by Japanese architect Shigeru Ban. Rising to a height of 21 metres, the materials used in construction include cardboard tubes and spectacular triangular pieces of stained glass.

Located in the middle of Christchurch’s Business District and home to many retail shops, The Crossing is a modern multi-storey shopping precinct with open laneways which connect the individual buildings. The architects Wilson & Hill combined heritage features with contemporary design to create a unique atmosphere.

New Regent Street is another with Spanish Mission architecture dating back to 1932. The street is now filled with boutique shops and eateries, while The Tannery boutique shopping emporium is notable for both its stunning architecture and art installations.

Malaysia’s Kuala Lumpur is home to a broad mix of cultures and architectural styles, including Chinese and Art Deco influences.

Attractions include the 19th-century Sri Mahamariamman Temple, built by Tamil migrants coming to work in the tin mines of Kuala Lumpur in 1873. In later years it has been adorned with Spanish and Italian tiles.

The Islamic Arts Museum Malaysia is the largest in south-east Asia, displaying models, dioramas, and artefacts from all over the world.

Designed by Cesar Pelli, the 88-storey towers were the tallest buidings in the world from 1998 to 2004, until they were surpassed by Taipei 101. The Petronas Towers remain the tallest twin towers in the world.