The Qantas wine tasting panel; eminent winemakers Tom Carson, Vanya Cullen and Steve Pannell, are hard at work in the laboratory of the St Hallett winery in the Barossa Valley.

Carson, from the Mornington Peninsula, Cullen from Margaret River, and Pannell from McLaren Vale are choosing the wines that flyers will be drinking in first and business class over the next six months.

It seems only appropriate that they do their sampling in the region that is regarded as Australia’s wine capital – home to brands like Penfolds, Jacob’s Creek and Wolf Blass that are sold around the globe.

Penfolds Grange and Henschke Hill of Grace are the regional icons, with Torbreck’s The Laird hot on their heels, but you can find lots of value in red wines from smaller labels including Teusner, Langmeil, Kalleske, Yelland and Papps, Schild Estate, Rick Burge, Torzi-Matthews, Glaetzer, Charles Melton, David Franz, Rockford, Schwarz and Two Hands
.
The Barossa is arguably the best-known “new world” wine region on the globe and a gourmet’s delight. It is rated alongside Bordeaux, Tuscany and the Napa Valley in terms of quality wine tourism.

And the Barossa is now just a one-hour drive north of Adelaide, thanks to some intensive work on the local roads.

It is a region that is about a lot more than just wine. It’s about the people, many of whose families have been farming the land for five or six generations. 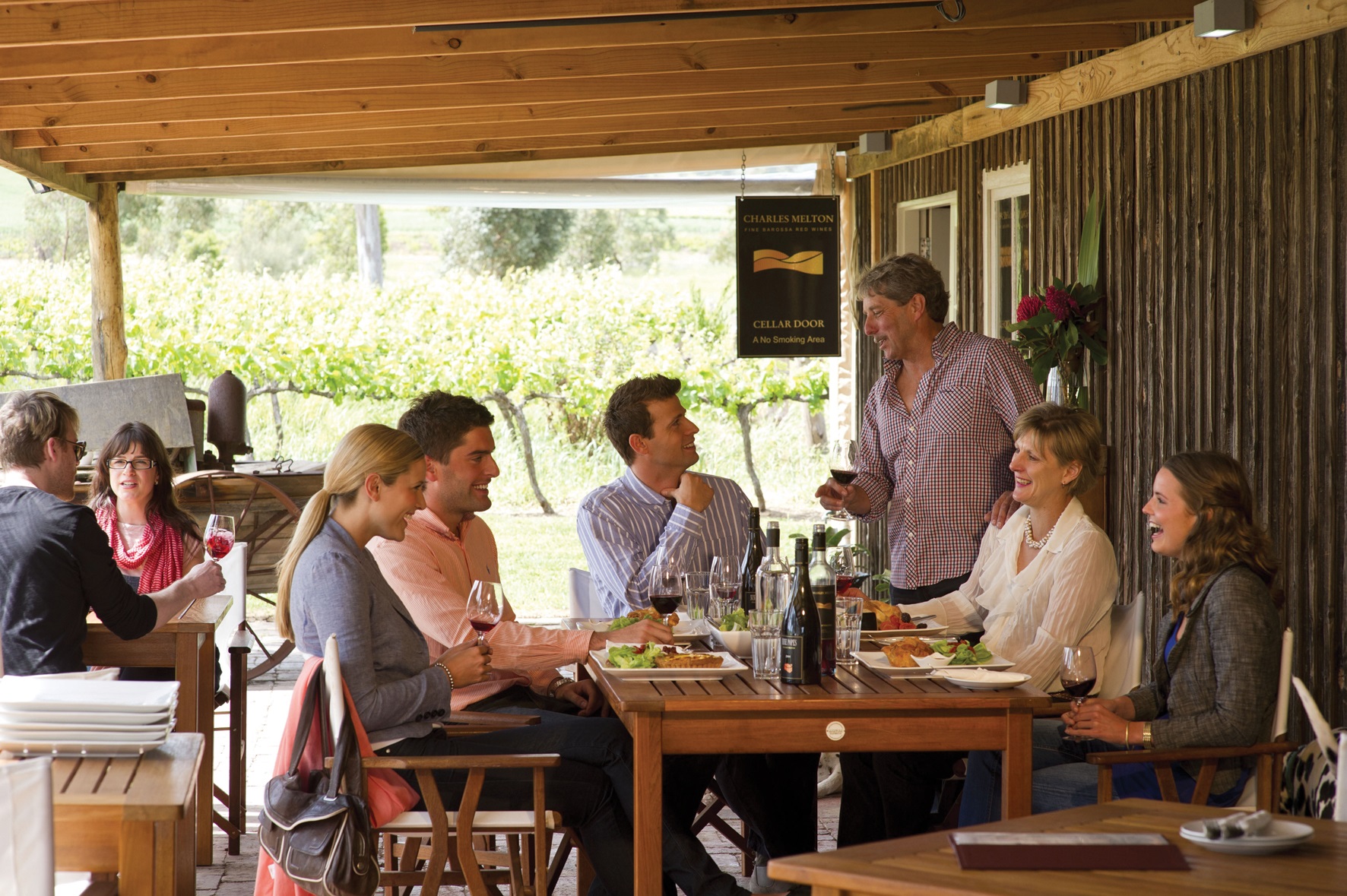 It’s about history; the region is dotted with old churches and cemeteries, and exploration: there are plenty of biking and walking trails through the vineyards.

It’s about the hearty food and ingrained German heritage; just visit the local butcher shops like Linke’s, where all the smoking is done using a secret family recipe, and the traditional bakeries, to unearth some unfamiliar gourmet delights.

German-speaking settlers, many devout Lutherans from Silesia seeking to escape trouble-torn central Europe, arrived in the 1800s and brought with them culinary traditions from their homeland.

Today visitors to the Barossa can try dill cucumbers, pickles and preserves, smoked and cured smallgoods (try mettwurst and lachschinken at Schulze’s), dried fruits, locally made egg noodles and a range of German-style cakes and pastries (sample a Black Forest Torte at the Tanunda Bakery or maybe a streuselkuchen cake).

The nearby Apex Bakery, with its famous wood-fired oven, has been a local favourite since 1924 and is just one of the many local shops, farm gates, wineries, markets and restaurants at which to discover the flavours of the Barossa.

A warm region viticulturally, the Barossa is synonymous with big red wines, usually made from shiraz and grenache, and previously for fortified wines while the cooler Eden Valley is best known for rieslings. Some of the Barossa vines are among the oldest surviving anywhere in the world.

Many younger Barossa growers and winemakers are experimenting with Italian, Spanish and Portuguese grape varieties including sangiovese and tempranillo, which are proving highly popular.

Sixth-generation vigneron Damien Tscharke from Tscharke Wines is one of the trailblazers in this field, making wines from savagnin, touriga, tempranillo, graciano and montepulciano, while the Domaine Day range features viognier, sangiovese, saperavi, lagrein, gargenega and sangrantino.

The wine industry here has deep roots. Penfolds was founded by an English doctor, Christopher Rawson Penfold, in 1844 – as visitors are reminded by a large roadside sign as they enter the valley.

Today, tourists visiting the Penfolds winery can try their hand at blending their own red wine in a laboratory with guidance from young winemakers.

The Barossa spreads across a number of small towns and villages; Tanunda, Nuriootpa, Greenock, Angaston and Lyndoch are among the more prominent but some, like Marananga, are mere specks on the map.

While tradition lives on, there is also plenty of modern tourism infrastructure to meet the demands of the growing numbers of visitors from around the world. The Butcher, Baker, Winemaker Trail guides visitors to stops including the Lyndoch Lavender Farm and Café, Maggie Beer’s Farm Shop (check out quince paste, local olives and verjus) and the Barossa Valley Cheese Company. 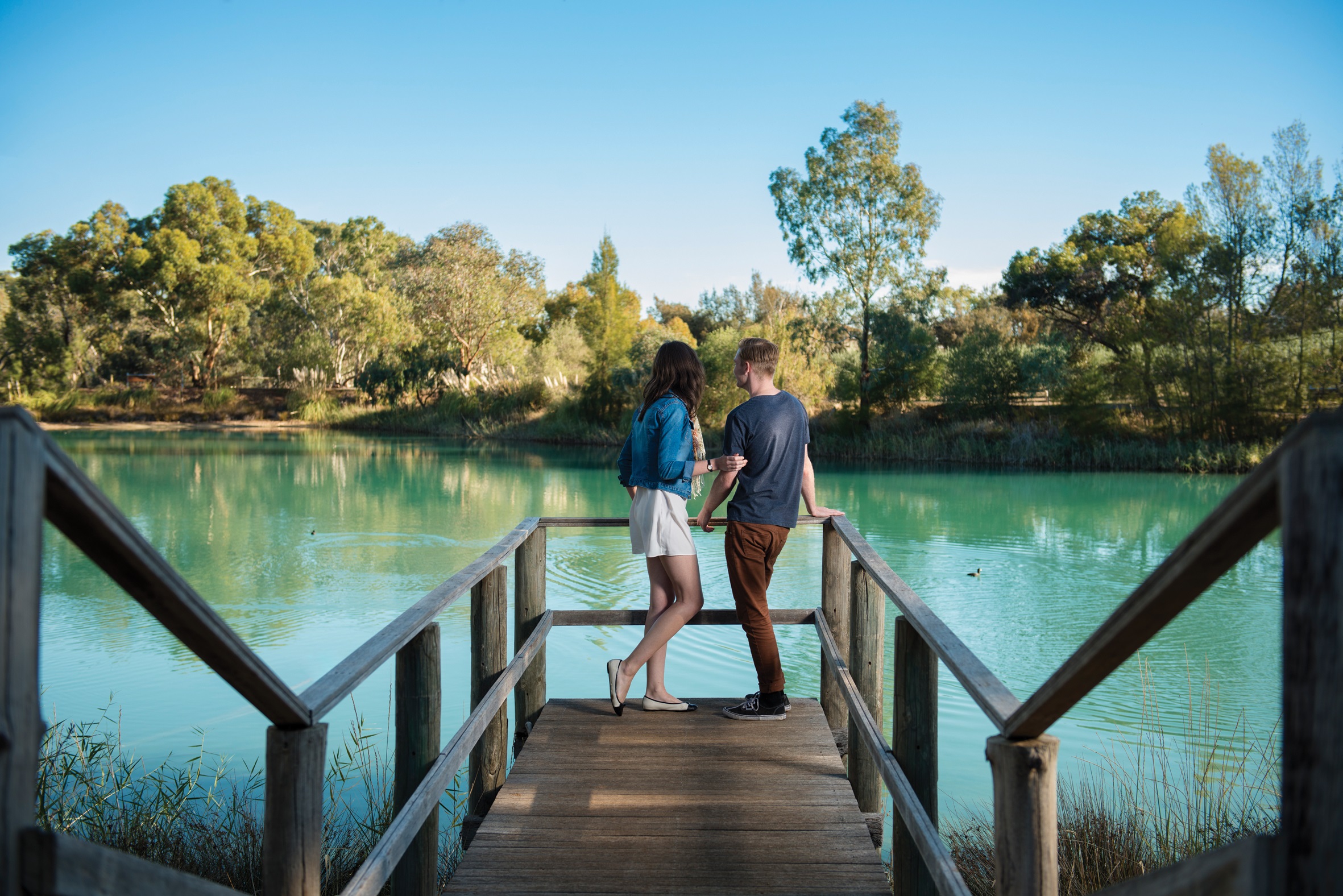 The Artisans of Barossa cellar door offers a quick snapshot of the region and is a facility shared by some of the region’s most talented winemakers, including Hobbs, John Duval, Massena, Schwarz Wine Company, Sons of Eden, Spinifex and Teusner.

Leading regional chef Mark McNamara is the man behind the food offerings at Artisans, and he also has an extremely popular cooking school.

McNamara was formerly head chef at the region’s benchmark restaurant, Appellation at The Louise, but his focus is now on teaching the basics of good, wholesome cooking.
He says he favours “time-honoured techniques” over new technology and his Kitchen Studio, a beautifully converted shop front, has been created to give people real food experiences.

“At its essence it’s all about handmade food,” he says. “We designed the Kitchen Studio to be a warm and inviting space, the perfect place to learn new skills and sharpen old ones.”

Would-be masterchefs should also check out Casa Carboni in Angaston. Run by chef Matteo Carboni and his Australian-born wife Fiona, it is a café, wine bar (enoteca) and cooking school rolled into one.

The cooking school provides hand-on classes for groups of up to six people, while the enoteca serves Italian-style platters, fresh pasta and European wines by the glass, as well as a Sunday lunch using Farmers’ Market produce.

This Barossa newcomer was established in 2012 after the Carbonis moved to Australia from Parma, northern Italy, in late 2011.

“Casa Carboni is an extension of our house where we welcome friends, family and visitors to enjoy a true Italian experience made of food, wine and being together or ‘stare insieme’.”

Matteo says. “We want to create an environment where we exchange information’.
For some other authentic local tastes, visit the Barossa Farmers Market, held every Saturday morning and is something of a meeting place for local vignerons.

Seppeltsfield, which dates back to 1851, has always been one of the de rigueur stops in the Barossa and that is the case more than ever with the opening of the winery’s 115-year-old cellar door and new restaurant Fino.

The new development, which also includes superb new gardens, was opened late in 2014 and has been hailed as one of the Barossa’s most significant gastronomic tourism endeavours in recent history.

Seppeltsfield managing director Warren Randall said the old winery – known for its magnificent fortified wines – is “now back to where she belongs, as Australia’s iconic wine estate.”

The Centennial Cellar at Seppeltsfield here holds every barrel of Tawny (port) from 1878 to the current vintage.

Adjacent to the new tasting facility is Fino at Seppeltsfield, where David Swain and Sharon Romeo (the couple behind Fino at Willunga in McLaren Vale) are serving a small but locally focused menu featuring dishes including Mayura station wagyu pastrami, Coorong mulloway brandade and Hutton Vale lamb pasties with silverbeet and sheep’s milk yoghurt.

Other “must visit” cellar doors include historic Penfolds and the modern Jacob’s Creek Visitor’s Centre where the display vines show visitors the difference between different grape varieties on the vine.

Chateau Tanunda, established in 1890, is widely regarded as one of Australia’s most beautiful winery estates, while family-owned Yalumba has atmospheric tastings rooms, wonderful old buildings and an eclectic range, including a number of whites made from the rare viognier grape.


No shortage of taste


There is no shortage of great places to eat, either, with Appellation part of the luxury The Louise complex and widely regarded as one of the best regional restaurants in Australia.

Hot on its heel come the new Fino and Hentley Farm, the home of talented chef Lachlan Colwill, who made his name at The Manse in Adelaide. For more exotic flavours, FermentAsian is a popular hangout for winemakers.

Other attractive options include Jacob’s Restaurant at Jacob’s Creek, Salters at Saltram, the Maggie Beer Farm Shop, Vintners Bar and Grill and 1918 Bistro and Grill.

Beer lovers are also catered for at the Barossa Brewing Company in Greenock, which is well known for its traditionally fermented beers while Rehn Bier in Angaston is an idiosyncratic micro brewery.