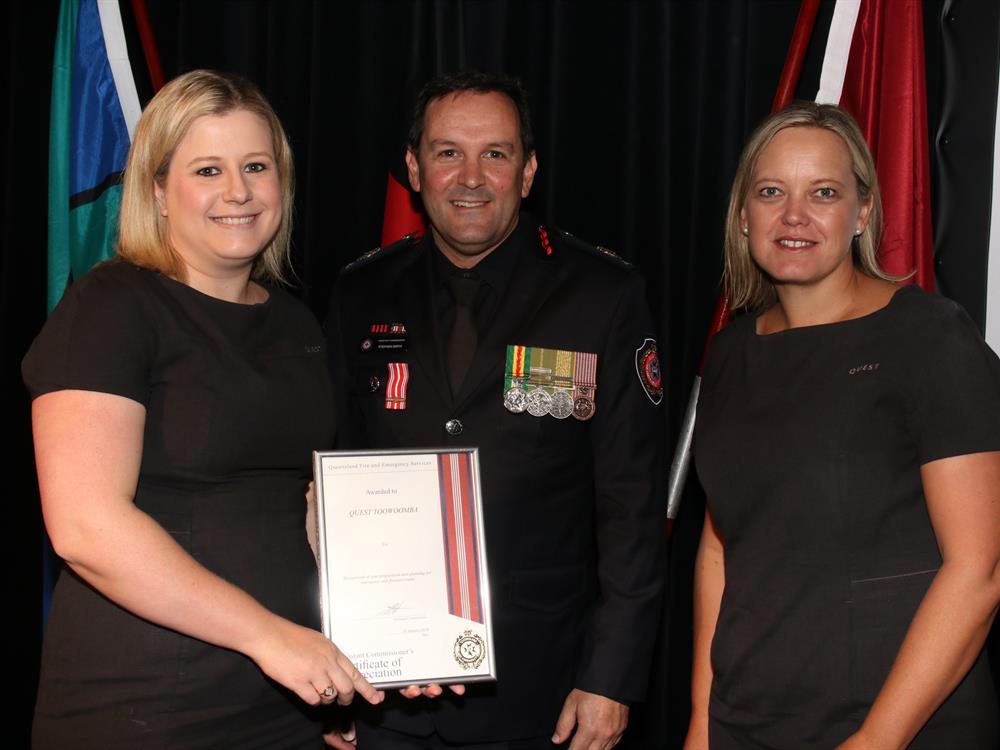 January 25, 2018 –Quest Toowoomba staff were named amongst some of the country’s most inspirational people and businesses at the 2018 Australia Day Achievement Awards, recognised for their efforts in the 2017 fire evacuation. The hotel caught fire on June 13 last year, after a blaze broke out at an adjacent property.

“The QFES acknowledges the commitment and dedication shown by the staff of the Quest Toowoomba hotel on the night of the fire and their assistance by successfully evacuating 90 residents. The on-duty staff followed their established emergency evacuation procedures, leading to the safe evacuation of the resident,” Acting Superintendent Evans said.

The Queensland Police Service media branch described the fire as the worst fire Toowoomba had ever seen. The property evacuation was led by Front Office Manager Angela Fowler, who was highly commended by the franchisee and General Manager, Cynthia Rice.

“We evacuated 88 people into five properties. There were 52 firefighters, 12 trucks, media, eight police cars, two maxi cabs and her and I. It was freezing cold, midnight and black smoke filled the air. Her commitment and focus under these circumstances was outstanding,” Mrs Rice said.

“Angela was focussed only on guest safety and worked efficiently and effectively to evacuate the guests, move them to safety, organising alternative accommodation and arrange transport, as well as liaising with emergency services and handling enquiries– and all with a smile.”

Guests recounted the professionalism of the Quest team and Cynthia Rice in particular, commenting on the remarkable lengths they went to in finding alternative accommodation in the middle of the night. Among the 88 evacuated guests were two judges who were successfully relocated and able to continue jury trials without interruption.

Recognition, such as today’s award, and support from the local community has been instrumental in keeping the team’s spirits high. Since the incident, the property has received back-to-back wins at the Toowoomba Chamber of Commerce 2017 Heritage Bank Business Excellence Awards for best accommodation, and was a finalist for Quest Regional Franchise of the Year. Quest Apartment Hotel also recognised Angela Fowler with an Employee of the Year nomination and Franchisees Tony and Jenny O’Reilly with an induction into Quest Hall of Fame.

As the team accept today’s prestigious award, they are proud to announce that the property will reopen its doors on Monday February 19.