The highly-prized Chairman’s Award was presented to Quest Wodonga Business Development Manager Amy van de Ven, who was selected from a network of staff representing 150 Quest franchises across Australia, New Zealand and Fiji. The Chairman’s Award is a prestigious and highly-esteemed award, with many previous recipients having progressed to Quest franchise business ownership.

“Ms van de Ven’s dedicated and tireless service to Quest, and the Wodonga community, is an outstanding example to her colleagues. Her willingness to consistently go above and beyond the call of duty and achieve her personal best is second to none. She is an extremely worthy recipient of this award.” Mr Constantinou said. 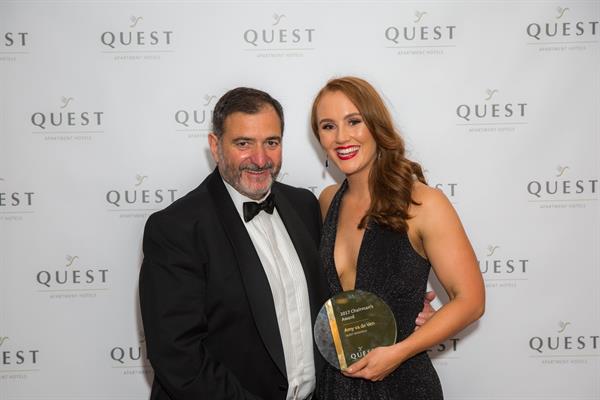 “Quest Ivanhoe continues to deliver the premium home-away-from-home experience expected by our valued guests, a reputation Quest has established over 29 years of operation. I congratulate Andrew, Nick and the team at Quest Ivanhoe for their hard work and dedication,” Mr Constantinou said.